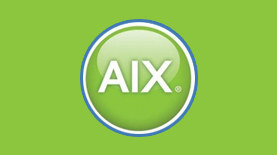 Learn to install, customize, and administer the AIX operating system in a POWER (System p) partitioned environment. This course is based on AIX 7.1 running on a Power7 system managed by HMC version 7. This course is also appropriate for prior releases of AIX and has a high practical content.

This course suits for anyone with system administrative duties implementing and managing an AIX operating system in a multi user POWER (System p) partitioned environment.

AIX (Advanced Interactive eXecutive) is a series of proprietary Unix operating systems developed and sold by IBM for several of its computer platforms. Originally released for the IBM 6150 RISC workstation, AIX now supports or has supported a wide variety of hardware platforms, including the IBM RS/6000 series and later POWER and PowerPC-based systems, IBM System i, System/370 mainframes, PS/2 personal computers, and the  Apple Network Server. AIX is based on UNIX System V with 4.3BSD-compatible extensions. It is one of four commercial operating systems that are presently certified to The Open Group’s UNIX 03 standard.

The AIX family of operating systems debuted in 1986, became the standard operating system for the RS/6000 series on its launch in 1990, and is still actively developed by IBM. It is currently supported on IBM Power Systems alongside IBM i and Linux.

AIX was the first operating system to utilize journaling file systems, and IBM has continuously enhanced the software with features like processor, disk and network virtualization, dynamic hardware resource allocation (including fractional processor units), and reliability engineering ported from its mainframe designs.

Structure of Unix include Hardware, shell, kernel and Utilities and Application

What is NIM,Basic NIM Components.

What is LPAR Basics Of Lpar ,What is DLPAR and What is VIOS.

Radical will prepare you for appearing these exams . we give real time exam environment .

we got 100% passing records for these technologies

You can go through below certifications . We also deliver these courses which will prepare you to get certify in below courses

Power Systems for AIX I: LPAR Configuration and Planning