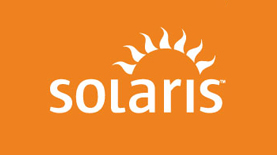 Oracle Solaris is a complete, enterprise-grade cloud platform. From built-in, near zero-overhead virtualization and application-driven Software Defined Networking, to scalable data management and high availability clustering, we give you everything you need to build your enterprise cloud. Check out the spotlights below to get more information on these and other advanced technologies.

The Solaris OS can deliver the security; manageability and performance that IT professionals need to help increase service levels and decrease costs and risk. Solaris x86 systems has gained rapid industry momentum over the past year, with more than 850,000 registered licenses to date and more than 900 solutions available for Solaris9 x86 through approximately 600 ISVs.

Solaris, also identified as Sun Solaris is developed by Sun Microsystems. It is a Unix Operating System. They had another version by name SunOS in 1992, which was surpassed by Sun Solaris 10. Since Oracle acquired it in January 2010, it has a new name which is Oracle Solaris instead of Sun Solaris.

Chapter 17. Introduction to VCS and VXVM

Certified Oracle Solaris 11 professional having 15 years of experience in Solaris System Administration , starting from Version 7 to 11

A Red Hat® Certified Architect (RHCA) is a Red Hat Certified Engineer (RHCE®) or Red Hat Certified JBoss Developer who attained Red Hat’s highest level of certification by passing and keeping current five additional hands-on exams on Red Hat technologies from the respective lists below. If you pass more than five, then you achieve a higher level of RHCA. For example, if you passed six exams beyond RHCE or RHCJD you would be an RHCA Level II. This status would be reflected on the verification page.

In order to retain RHCA status, you must keep at least five credentials beyond either RHCE or RHCJD current from the respective lists on the SKILLS tab below. These need not be the same credentials you used when you first earned RHCA.

Joining the RHCA ranks requires significant time and effort. If you are interested in pursuing RHCA, we recommend the Red Hat Learning Subscription as your most cost-effective and flexible option. Best of all, once you achieve RHCA you are eligible for a 50 percent discount on Red Hat Learning Subscription to help you keep your credentials current or pursue new ones. If you are not an RHCA , there are great discounts happening if you take the subscription through Radical

You could Choose any of the below RHCA track as per your technology interest .

For Helping our candidates to become RHCA , Redhat introduced cost affective learning module called RHLS . Which covers 45+ courses of Redhat with all practicals and Online easily configurable LAB . Get in touch with Institute to know more about RedHat Learning Subscription .Get 50% Discounts on All redhat Exams if you bundled the RHLS with Redhat Exams